Welcome to the GRC Recorders pages. This blog provides details on all the relevant news of Glamorgan’s scarcer birds, plus all BBRC & WRP decisions that affect us locally. It will also be used to document the status and occurrence of these scarcer species and we welcome contributions from anyone with photographs, artwork or documentation of rarities past, present and future. The GRC also welcomes all seawatching news from around Glamorgan and news of passage migrants in spring & autumn, uncommon birds in our area and unusual behaviour.


All visitors are welcome. You must first register by sending an email to GlamRC@gmail.com before you can contribute. An invite will be sent to your email address. Blog content will be strictly moderated. Access to pages and downloads are available to everyone. All photographs on this blog remain the property of the originator. If you would like to use photos, please arrange permission beforehand.

The Glamorgan Rarities Committee, in conjunction with the Glamorgan Bird Club & Gower Wildlife , have agreed to co-operate with the Welsh Ornithological Society in the sharing of bird records & photographs in the interest of keeping accurate records and to promote birdwatching in North, Mid & South Wales. 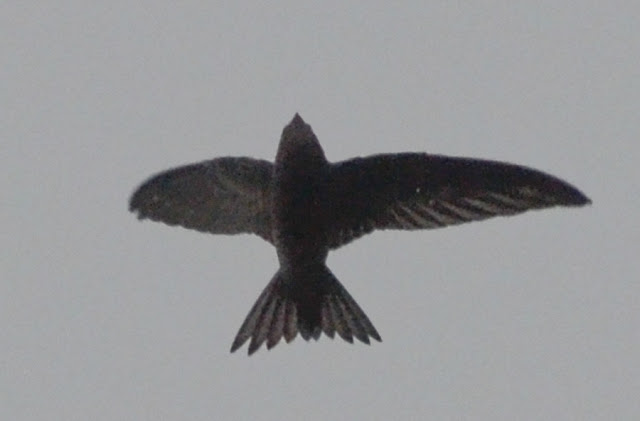 The 5th of November is fast becoming a memorable date for Glamorgan Birders. In the not so distant past the Isabelline Wheatear turned up on this date, back in 2011. This year Eddie Hunter found a Pallid Swift from the comfort of his home (nice garden tick!). I've already freed the diary for 5/11/16 to spend the day birding.

Anyway, after last night's mild ID uncertainty, today the Pallid Swift gave itself up to a few brave Glamorgan listers as well as some of the finest Carmarthen and Pembrokeshire have to offer. Appearing to fly from roost in a tree at the playing fields off Addoldy Road at 08:02, Rob Jones spread news that the bird was still present. Not long afterwards Phil Bristow and myself were watching it drifting over the rooftops nearby. Over the next 2 hours the weather remained overcast, but the cloud was higher than yesterday afternoon. In these conditions the bird seemed to prefer feeding well above the rooftops, which meant it was generally much easier to keep track of its whereabouts. However, these same conditions found it ranging fairly widely and it was seen NE of Glyn-Neath at 09:30. Rain started to fall around 09:30 and the cloud level dropped, this brought the Pallid Swift back over Gellidawel Road, where it had been showing best for most of the morning. By about 10:00 the bird had drifted out of view low over the rooftops and hasn't been reported since.

The consensus of opinion on site was that it looked good for Pallid Swift. Some occasional brighter areas in the cloud would allow the bird's pale plumage tones to be seen, but rarely much more detail as it kept it's distance. The jizz of the bird always appeared good for Pallid, particularly the broadness of the wings with blunt tips. The languid flight action was noticeable, and comparison of sorts was made possible when an overhead Peregrine caused it fly more frantically - resembling a Common Swift with fast action. After the danger past the flight immediately returned to an unhurried action with distinct periods of gliding.

The distance between observer and bird meant that plumage detail was always tricky to make out. However, the photo above (taken at 08:27) caught the bird when it was fairly low down. A slightly raised right wing has allowed the underwing flight feathers to be partially illuminated. This photo shows pale fringed greater and median coverts, and the contrast between them and the lesser coverts appear obvious. Therefore, in my view, the combination of this plumage feature and the structural features of the bird, together with its flight action and behaviour mean this bird can be considered a Pallid Swift.

Obviously this will have to go before BBRC for an official judgement on the bird's credentials, but I'm confident it will produce a favourable decision. In the meantime I would like to pass on my congratulations to Eddie Hunter for delivering the latest addition to the Glamorgan List. 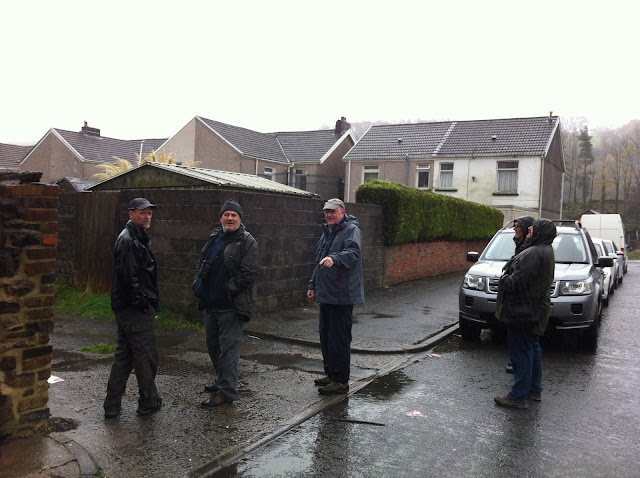 A few lucky Glamorgan & Carmarthenshire birders at Glyn-Neath on a wet Friday in November!
Posted by Mark Hipkin at 15:29

In my view a combination of features evident in the photos and, equally importantly, to the human eye in the field today all point in one direction - Pallid.

6th November should also not be forgotten for another Glamorgan 1st. 10 years to the day a (Magnificent) Frigatebird was seen over Flat Holm. Excellent little sketch in the Flat Holm log should you ever get out there of the bird being bothered by a Raven........Little & Large!
Jake & I were very lucky to get to the Swift today & watched it for around 3 to 4 minutes before it drifted slowly up the valley in the direction of Hirwaun.

Yes well done Eddie, all that traipsing around last month, when all you had to do was sit in your kegs on the computer glancing out the window. I might try it myself tomorrow...

I am pretty positive this bird flew over my house.

I saw what I thought was a small dark falcon flying low over my house. After looking at this website the day after and seeing reports of Pallid swift I am 95% sure but I only had a 2/3 second view as it was very fast. I am only around 5 miles away from Glynneath.

Due to the very brief nature of the sighting is it worth me submitting a record a recotd?